The world is ending in one week. This we know for a fact. It is too late to stop it. It cannot be slowed down anymore. Especially not by you, because you are just a group of large dogs. All you can do is try and make the final days as best as you can for those that are near and dear to you. Your owners, your community, the other wild dogs in the park, whoever you hold dear.

The World is Ending and We Are Very Large Dogs is a GM-less collaborative storytelling game for 2+ players, wherein the players work to weave stories of bright moments in the face of Armageddon. The mood, intensity and tone of this game are up to you, the players, to decide, as the adaptable ruleset is designed for anything from a pulpy Mars Attacks-esque alien invasion to a a dark, mournful, melancholic ending.

This is version 1.0 of Very Large Dogs, however if you purchase it you will recieve any updates or revisions free of charge.

In order to download this game you must purchase it at or above the minimum price of £1 GBP. You will get access to the following files:

My friend and I played "The World is Ending and We Are Very Large Dogs" twice.  We did choose to use a moderator.  We recorded both sessions, and posted them as podcasts.  The end of each session also has a retrospective on what went well, and where we struggled.

Here is our Underdog session: https://spotifyanchor-web.app.link/e/QhpjcMdA6vb

Here is our Blu session: https://spotifyanchor-web.app.link/e/WxOSgUEA6vb

Very vague rules for an RPG micro game, we had fun, but I was expecting much more. Go into it only with a well-setted party that knows how to improvise with story creation and (or at least) act.

If players are willing to act (f.e make sounds or gestures), it will be an adorably funny experience.

I got this game in a bundle (list) and honestly, I would never think about buying a physical RPG before. We pick it (out of 350+ other games) for two reasons: This was relatively at the top of the list of all the RPGs bought in that bundle, and the title is indeed a very original "selling point", for us, who have soft spot for dogs.

The instructions are very vague. There are some examples of scenarios, which helped, but they heavily refer to movies players may not know. There is also vagueness in description of the tone. Alibistically set to "players freedom". Author could at least mention some intended tone of his/her. F.e. In RPG where we pretend we are DOGS at the end of the world, it will be majority easier to go on wacky adventure with tragi-comedic tone than trying to pretend this is serious. And for those edge-case players, who wants depressing narative there could be a caveat that it is not forbidden ofc.

We actually had this problem. Going in, we prepared the name tags on bowls, and put in some chocolate cereals to eat them dry as snack. Ready for this to be light hearted fun. But after that, we were instructed by the manual and left confused if this should be some psychologic probe into our in-game owners or story focused on dogs that are figuring out some final countdown.

This aspect was not clear from the instructions either. Are we, as dogs 100% sure and aware that world is ending? If the answer is alibistical "up to you", then I dont see a game manual, just some broad guidelines for inspiration. There are hints that we can stop the END, but at the manuals final page, this is contradicted.

There are two playable days before the end and on final day only narration should happen. On first day we clearly didn't have fun. Players managed to set up some background, but it was almoust like a heist-planing with no bank to rob, and clarity to what actually should we do.

Second day was much more entertaining. We just didnt follow the game manual at all and just started to move the dogs in the world ( before, it was just talk, because thats what insturctions told us). When action was introduced, our whole adventure suddenly had its flow and we squeezed the situational humor dry. Luckily I was playing this with the right type of players that wanted to play out dog's quirks and funny situations.

My verdict is at the top in TLDR. Personally I will be seeking new experience out of those others RPG from the bundle, then giving this one second chance.

I Have just little experience with physical RPGs, and this may have been my first truly GM-less one. If you feel that my criticism sound "newbie" it could be the reason for my bias.

In love with this game. A player was missing from our DnD game so we popped out this bad (good) boy and played for 5 or so hours and only got through story concept and one of our pup's stories. We had SO MUCH FUN and it's all thanks to the lovely prompts and concept of this game. Thanks!

One of my favourite TTRPGs I've ever played. The concept is spectacular, I adore the focus on care, kinship, and friends. I've only played it once so far but it was really fun 'building' our dogs, seeing how they interacted with one another, and building connections between them and their best friends.

My group found the role of narrating The End quite difficult-- we struggled to find direction; I think if we'll play it again we will just allow each dog to narrate how its quest goes, as the most enjoyable parts were building our own dogs' experiences.

Successfully made us all cry, from laughter or from grief. Beautiful, poignant, really a wonderful way to spend an evening among these apocalyptic times.

Thank you, friend. This review meant a lot to me. I'm glad my game bought good times to your table.

This was really good! I finally managed to play yesterday with a friend and it was very enjoyable. We based the game on Ending #2: The Long Walk and went for a pretty sombre/tragic story. We both loved it, especially the end. We decided to stop at the nice moment and skip describing the actual end.

One thing that was a little confusing was realising that the Happiness needs to be something that takes some effort to prepare/setup, so that there can be a "story" about it on the day before The End. Otherwise, super easy to play and smooth. Great job!

Now I have played a second time. We used Ending #3: Dog of the Dead, but with a lighter tone (more like in the first ending). It worked well, although I wonder a couple of things:

Thanks for showing such interest in my game. I'm flattered and honoured that you took the time to play it multiple times. In regard to your queries:
1. As I was writing, the friends weren't supposed to all be the same person, but they are related by proximity, as you're all supposed to be familiar with each other, it makes sense that the friends are all in or around the same neighbourhood or village

2. The intention was for it the rest of the table to portray The End, in turn, for each dog. If you found this cumbersome, perhaps try instead of doing each players' days as a whole at once, split the play into smaller chunks of time for each day, so that no one player has the floor for too long.

3. To be honest, the Dog Creation is first in the document as that is the norm for Role Playing books in my experience. If your party saw more sense in decided on the Ending first, then by all means go that way. There's no wrong way to enjoy this game, it's supposed to be malleable to your party's styles, so that you may lean on each other to weave memorable stories. 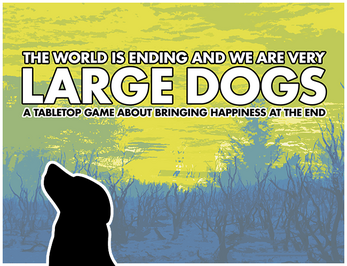